Yesterday I travelled to Canberra with a group of Rainbow Families to urge parliamentarians to block enabling legislation for a plebiscite in the Senate. The main aim of the day was to give our kids a voice and an opportunity to talk about how a plebiscite would affect them. The kids were fantastic and, as parents, we couldn’t have felt more proud.

It was a hugely successful day with many moments of delight and joy, and some of anger and sadness.  Though there were undoubtedly some very difficult and challenging situations for the kids, it was enormously empowering for them too. I wrote this today to say ‘Thanks’. 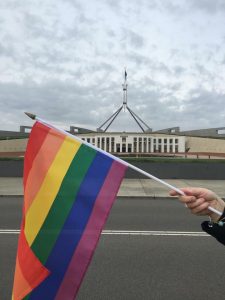 Tuesday was an amazing day and I’m still trying to get my head around everything that happened. I don’t know about you, but I’m exhausted. I hope some of you managed to persuade your parents to give you the day off school. Quite frankly you all did brilliantly just to get through the day without a meltdown. When Corin’s other mum asked him how it went he said: ‘There was a lot of waiting, a lot of walking and a lot of being told what to do!’ And they’re, like, his three worst things!

It was certainly an emotional day that’s for sure, and I reckon you’ll all have stuff going around your head right now. So, there are a couple of things I want to say. First up, you all spoke beautifully; you were honest, smart and thoughtful and you articulated your arguments clearly and concisely. Even if you were nervous or anxious, you still went ahead and said what you’d come to say – you got the job done. It’s not an easy thing to talk to a politician – lots of adults won’t do it – and especially when it’s about something so personal, like your family.  You were there to represent the kids of rainbow families and you did that with great skill and courage. I want you to be really proud of that.

There were lots of highlights for me, but mostly I just loved listening to you guys talk. The session in the afternoon with the ALP politicians when you all read you speeches was especially moving. I wasn’t the only one trying not to cry, trust me. And it was really cool to hear Penny Wong and Louise Pratt talk about their rainbow families and know that there were some people who really understood what we were talking about.

Now I need to talk about Question Time. It was pretty crap wasn’t it? I mean it was interesting to see Parliament in real life and I thought that was really cool, but the Prime Minster definitely wasn’t cool. Tanya Plibersek asked that great question about Eddie and Malcolm Turnbull turned it around to say that she was using Eddie and taking advantage of him, which she wasn’t.

To me, it looked like the Prime Minister was showing off in front of his mates and they were all cheering him on. That made me feel really bad, and I hated that you had to listen to that. But what really upset me most was that the Prime Minister was saying that a plebiscite would be respectful and civil at the same time as he was being exactly not respectful and not civil. I don’t know how many of his mates got that, but I know you did. When he said that, I wished we were watching on the telly so we could just switch him off, but it was good that Flis stood up and we all walked out. Turing your back on someone is a very effective way of saying you don’t like what they’re saying. And we really, really, didn’t like what he was saying.

So today it’s being reported that Bill Shorten is going to announce that he will block the plebiscite which is exactly what we want him to do. Now, a lot of people have been asking him to do that in recent weeks, but I am one hundred percent sure that our visit this week had a significant impact on that decision. Telling your stories made people realise that a plebiscite would hurt real families, real kids. And all those photos we took got shared on social media, and newspapers ran articles, and we were on the TV news. And there was that great video clip with Maude and Sadie and Corin  that got gazillions of views. All that means it wasn’t just the people you spoke to on Tuesday who heard your message, but tens of thousands of others too.

So, on behalf of all the rainbow parents: ‘Thank you. Proud of you. Love you.’

Job well done guys. What shall we do next?!