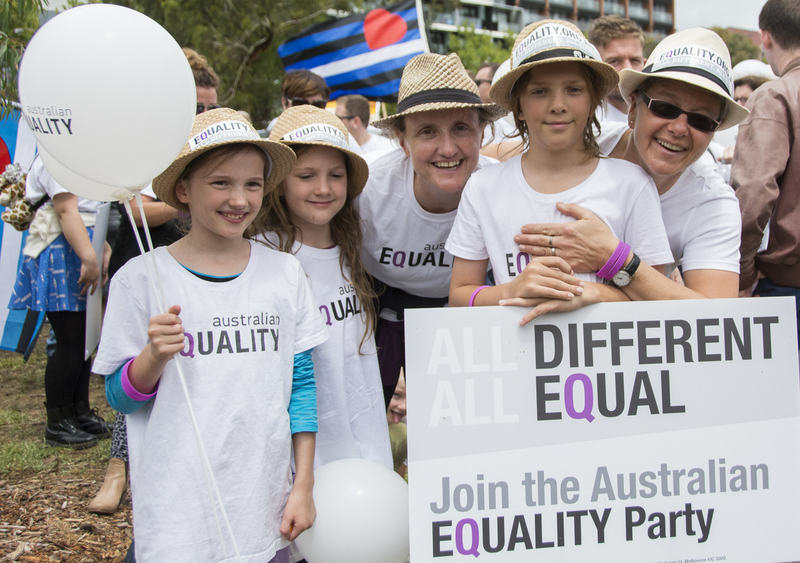 If you are on the Australian Equality Party mailing list or are a Facebook friend, you may have already read this in a Newsletter or Note. This blog is for everyone else, and especially for my Canadian in-laws, who stay in touch by blog – and who’ve been extremely supportive of this venture. It’s also for the record as I introduced the AEP here almost three years ago.

Over the last few months, the AEP team has had an opportunity to evaluate the outcomes of the election and reflect more broadly on the last three years. We feel there is much to be proud of and we want to share some of our reflections with you.

After all, none of it could have happened without you.

• In three years we went from a conversation amongst friends to a fully functioning political party with 600+ members and an extensive support base. We ran nine candidates in three states, attended numerous hustings and forums, staffed 50 polling booths, and garnered 45,000 primary votes.

• We’re confident that we helped to make marriage equality a significant issue in the election, and raised the profile of LGBTI issues more generally. We loved the story of the long-time LNP supporters from small town Queensland – parents of a gay son – who voted for us in the Senate. We heard a few stories like that.

• We engaged a diverse support base which included people from across the political spectrum, a significant number of whom were straight allies. Many people who worked with us had never previously been involved in politics or social change and they told us time and again that they felt empowered, represented and affirmed and we’re really proud of that. We know we made small, tangible changes to lots of people’s lives.

• We met with, and listened to, literally hundreds of community members, leaders and allies and developed some really important relationships. We felt like we got a handle on what is important to our community, and what needs to change. This has laid the foundation for what we plan to do next. 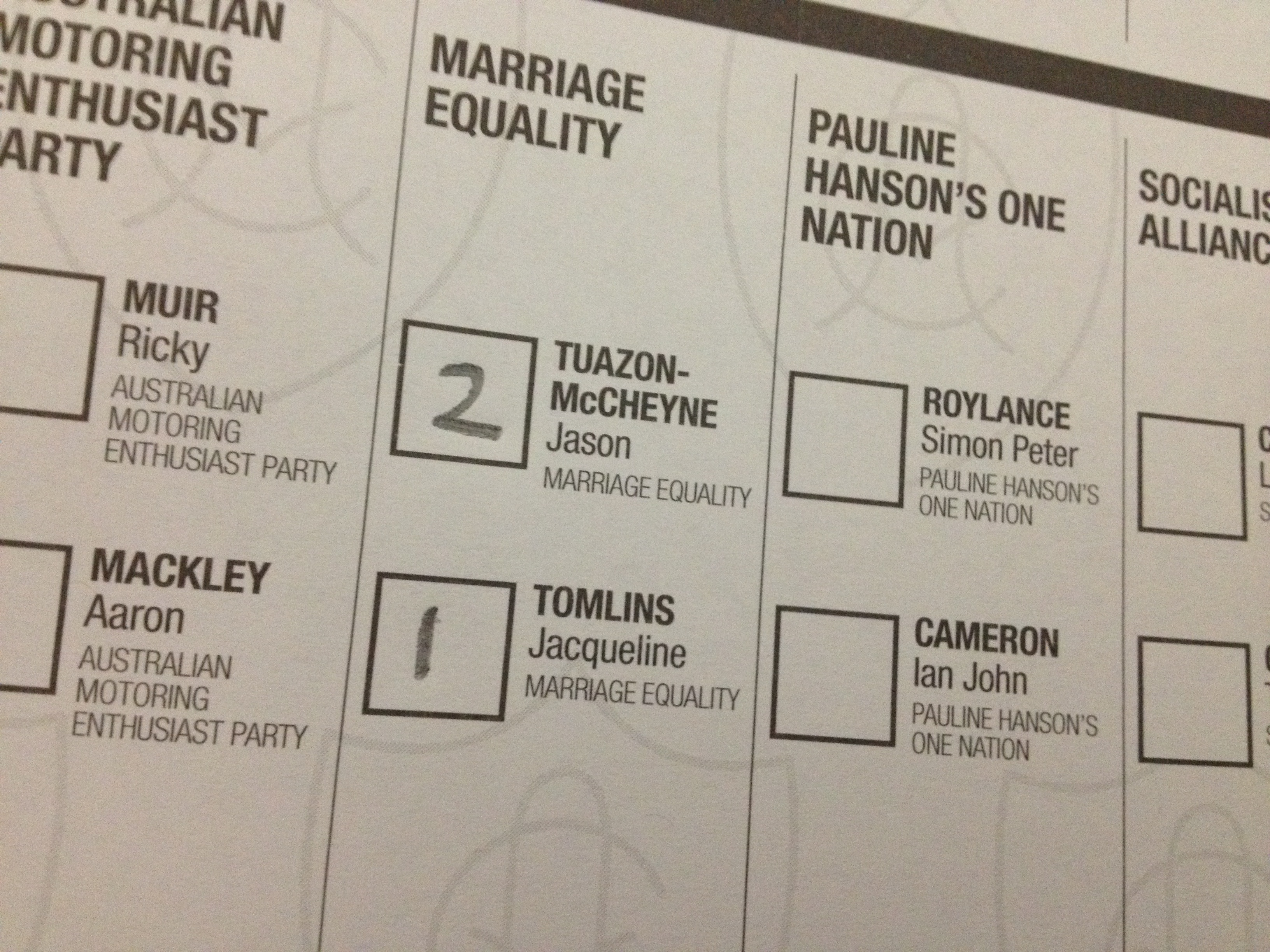 • We developed a fantastic policy platform based on extensive consultation, research and best practice. Our suite of polices provide a pathway to full inclusion for LGBTIQ people in all aspects of life and, to our knowledge, nothing else like it currently exists. We were very happy to see other parties use sections of it in their campaigning!

• Many people told us our website, branding and social media were highly professional and engaging. Our messaging and written communications were clear and effective. In fact, lots of people thought we were much bigger than we were and that we had an office with paid staff!

• We got some great media in both the LGBTIQ and mainstream press. A highlight for us was Jason going head-to-head with Lyle Shelton on Patricia Karvelas’ show on Sky News. That was when Lyle admitted that if there was marriage equality people couldn’t automatically assume he was married to a woman and might think he was gay!

• We organised some great events – the QQ&A, a 1st Birthday party, Change-Makers – as well as a number of really fun and successful fund-raisers. Our fund-raisers were always about creating community and conversation as well as raising money. Politics is an expensive business and we reckon we raised something in the region of $250,000 and people donated countless hours of unpaid work.

On a personal level, the last three years has been an extraordinary ride for our core team, and was at times, both exhausting and exhilarating. We all learnt a huge amount, both about the political process and our community, and we all felt changed by the process in some way.

We loved building something from scratch and being bold and innovative. We wanted to do things differently and sometimes that worked and sometimes it didn’t. It was important for all of us to act with integrity and to look after each other and we believe we did that.

At our evaluation meeting we had a fascinating discussion about how you create change. Everyone in our core team has a similar background – as an advocate, campaigner or social changer, and none of us had previously been involved in party politics. For us, there were positives and negatives to dipping our toes in that water!

The most important thing for us is that we continue to create change – and support others in our community who are also creating change. Much of our discussion has been around how we can best do that as a small political player now the election is over. We want to make sure all the time, energy, effort, money, marching and support you invested in us are used to best effect, and we want to share this next part of the journey with you.

State and federal election
The next Federal election is too far away for us to engage with right now and we’re putting that on the back-burner for the time being. The Victorian State election is in 2018 and in a year or so we’ll evaluate whether it’s feasible to run some candidates. In the meantime, this is what we’re going to work on.

Policy platform
Our policy team crafted what is Australia’s most extensive LGBTIQ political policy document, covering everything from parenting to ex-gay therapy and LGBTIQ asylum seekers. We are really proud of this work and have a plan to share it with other political parties and peak bodies. We’ll keep you posted.

Equality project
Jason is working on the idea of holding a national conference to create an independent national LGBTIQ rights body aimed at developing full citizenship for LGBTIQ people. The conference and national body will also have an indigenous, multicultural and feminist stream and involve wide community representation. The goal is to work together, to build bridges, and to speak with a unified voice to serve our community.

The Brave Network
Nathan is leading a support and advocacy group for LGBTIQ people of faith who have experienced extreme and systemic homophobia, particularly through the ex-gay/conversion therapy movement. Brave has supported the development of several hard hitting radio interviews with pro-LGBTIQ faith leaders and has contributed to the movement to stamp out ex-gay practices in Victoria.

Rainbow families
Jac has been working with Rainbow Families Vic and NSW on the plebiscite campaign and went up to Canberra for the successful lobbying day. Next year she’ll be expanding her work – developing resources, giving presentations, and running training for service providers working with rainbow families.

Thanks again for all your support over the last three years and for all the work you do. We look forward to sharing the next three years with you. We hope you have a safe, fun and recuperative holiday season!