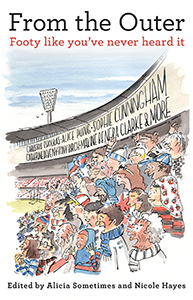 The Purple Bomber in From the Outer: Footy Like You’ve Never Heard It: Published by Black Inc., April 2016

A celebration of our great game, From​ the Outer brings together 30 personal stories about Aussie Rules from unexpected voices: those who are female, Indigenous or gay; those with a disability, a foreign accent or even – perhaps most dubious of all – literary leanings.

Some are closet fans, some are out and proud. Many are ground-breaking and revolutionary, shaking up the institution that has dominated cultural life in Melbourne, and much of Australia, for generations. Some are actively involved in the game, such as Leila Gurruwiwi, panellist on Australia’s first all-Indigenous footy show; Angela Pippos, one of Australia’s first female sports commentators; and Jason Tuazon-McCheyne, founder of the LGBTIQ supporter group, the Purple Bombers. Others, like Christos Tsiolkas, Sophie Cunningham, Tony Birch and Alice Pung, share their poignant, passionate experiences as spectators and supporters.

Engaging and surprising, From the Outer shows how footy can both thrill and devastate, exclude and unite, by shining a light on the diversity and splendour of the game. 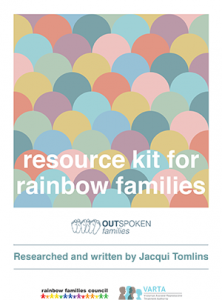 OUTspoken Families came out of my experience of raising three children in a rainbow family for the past twelve years. You can read more, and download the full resource kit, here.

The Infertility Handbook: A guide to making babies: Published by Allen and Unwin, 2003

Written by a woman who has been through the whole process herself, The Infertility Handbook provides accessible, personal and accurate information for people undergoing and form of fertility treatment. After four years and ten cycles, Jacqueline Tomlins has learned a lot about IVF – not just the nitty-gritty of hormones and sperm, but the way to take control of it rather than letting it take control of you. Tomlins has worked as a teacher, researcher, trainer and advocate and is now a full-time writer.

This is an excellent book which contains extensive information about fertility, infertility and its causes, the wide variety of treatments, and possible outcomes. It includes the effect of infertility and the treatments on the male and female involved, including the social, emotional and physical effects. Professor Carl Wood, MBBS, FRCS, FRANZCOG.

A Girl’s Own Adventure: Across Africa Any Way Any How: Published by New Holland, 2003

In a not quite mid-life crisis, Jacqui and Sarah – fancying themselves a bit rugged – head off to Africa in search of the deepest, darkest bits they’d seen on Sunday evening documentaries on the telly. Tear-gas riots, cholera, spider bites, rifle-toting rangers, over-zealous marriage proposals and more bed bugs than you could poke a stick at, were not, however, quite what they’d been promised in those National Geographic specials. Not simply a very funny tale about the dangers of enthusiasm overriding common sense, this book is also a story about stepping out of your comfort zone and pointing your life in a different direction. It’s about reaching out and – every now and again – touching the edges of your life.